As most of you know, I am homeschooled. As some of you might not know, I am also a leader in Awana. About a year ago, one of the fourth-grade girls asked me what grade I was in. As I was telling her that I was a sophomore (otherwise known as a 10th grader, to those of you who get confused with the freshman/sophomore/junior/senior stuff like I do), another little girl interrupted me to “explain” my homeschool situation.

“Well, she WOULD be in 10th grade, if she was in school. But she’s homsechooled, so…”

“Excuse me,” I interjected. “Homeschoolers have grades just like public school kids do. If I went to Aurora High School, I would still be in 10th grade, just like I am now. Where I’m at doesn’t make a difference.”

Some homeschoolers are pretty touchy about their education, but I hope you’ll believe me when I say that I was not offended when the little girl told me I wasn’t ACTUALLY in 10th grade. To be honest, I found it quite funny. But really, when you think about it, that’s the impression that many people have of homeschoolers. (And to be honest — again — some of them have good reasons for why they think so.)

I mean, we’re the people who have horribl speling, makes a mess of sentence structure, or don’t know where to put our commas, and apostrophe’s. I mean; come on, some people think we don’t even know how to use semicolons. And, of course, we’re well known as the people who can’t put “there, they’re, and their” in the right places. Really, though, how hard can it be?

I want to go over their where there using they’re Wii.

See, it’s not that hard.

I want to go over there where they’re using their Wii.

Why isn’t it possible to spell “can’t” without an apostrophe?

Is the long hand on the clock the “minute hand” or “minuet hand”? Does it really matter?

Why does a homeschooler have to know how to spell, anyway?

Well, you know what?

Just for the record, I’ve seen plenty of public-school people (as well as adults!) who can’t spell. I’m not trying to point fingers or anything, but I’m sure you all know that most of us, homeschoolers and non-homeschoolers, need to work a little harder on our grammar.

I had a difficult time with “affect” and “effect” before I finally googled the difference between the two words. (And unfortunately, I still have trouble even after studying it. Every time I want to use one of those words, I have to go online to figure out which one is which.) Then there’s the capital/capitol thing. Grr, why can’t both meanings be spelled the same way? One of my worst problems is using “loose” and lose” correctly. I almost always get it wrong. I am capable of getting it right, but I just never stop to think about it…which is the thing. Most of us never stop to think about what we’re saying.

Believe me, I have a lot of work to do on my grammar, too.

Do you want to know something that [I think] is destroying teenagers’ ability to spell? (Since we’re already on the subject…)

One of my cousins wore a shirt that said something like, “i ♥ 2 txt.”

It took me forever to figure out what it meant.

And all of those abbreviations like BTW, TTYL, PTL, TMI, LOL…

I remember watching a girl’s flying fingers as she texted, marveling at how quickly she responded to each message she got. That is, until I found out that to write a sentence that originally might be ten words, you only have to insert numbers and a few letters here and there, and VIOLA! Your sentence is now a quarter of an inch long. (Now again, I’m not against texting! I do it myself. But I do think that is one reason why many kids can’t spell worth beens. I mean, beans.)

And do you know what else? (Hehe…) Kids aren’t the only ones that have horrible spelling or bad grammar…

↑ “Wrold Famuos” or “World Famous”? (Notice that it’s not just the “wrold” that’s spelled wrong…”famuos” is too. ↑

↑ Thanks, but even if I needed fashion decor, I wouldn’t want the inferior solution. ↑

↑ I’m not sure I’d want to send a child to whatever college they’re advertising. ↑

Watch out for using commas, too.

For instance, if I find inspiration in cooking my family and my dog, you can tell, for one thing, that I missed one or two commas in there, and, for another thing, that I must be sick, because I hate cooking.

And, just for good measure, I’ll give you a few pictures of translating gone bad.

↑ Dear Customers! The restaurant administration is not responsible for the personal staff left unattended. ↑

↑ I’m not sure about you, but an elevator in China doesn’t seem that convenient to me. ↑

All that to say…

Spelling is a virtue.

My little brother’s pretty cute! And funny. And silly. And strange. And ticklish. (*ahem* All Bergens are ticklish. If you ain’t ticklish, you ain’t a Bergen! It’s one of those family traits that gets passed down from generation to generation.)

Anyway, since I haven’t posted about Henry since…well, since who-knows-when, I figured maybe it’s about time. Especially since he’s so cute and funny and silly and strange. And ticklish.

Here is a rather strange conversation I overheard between Henry and Abby:

And speaking of Henry’s name, in Henry’s own words, where is it?

Why, if his real name is Henry, do we call him things like Alice, Al Capone, Pristopher (like Christopher, only with a “P”), Hank/Hankub, Manny, Toosun, Honey Bunches, Lanitoba (like Manitoba, only with an “L”), Henna, Bubs, Tippers, Tapone, Kip/Tip, Doodles, Alphonso, Hyin, Bithitoe, Al-bithitoe-balooey-gigawagater (yes, some of us ACTUALLY call him that!), Popeye, York/Yorkie, Birdie, Puggles, Pudgibalooey and BAD-BOY!?

Henry’s favorite words are Birdie, Car, and No! Birdie sounds like “Bir-DEH.” We have a nest of two robins (and their babies) on our front porch, so he says bir-DEH quite frequently. We live right on the highway, so he also gets to say “car” just as often as bir-DEH. And *ahem* he likes to use “No” whenever possible too.

Henry likes to laugh at himself. He probably got that talent from me. I laugh at myself a lot too. Only I do it because I think I’m so dumb, and he does it because he thinks he’s so smart. 😉 Big difference…the main difference being that he’s incredibly cute when he laughs at himself. No forehead-smacking or sick-seal-guffaws…more like a nose-wrinkle, a few giggles, and a hiding of his cute little face behind his two tiny hands. Sometimes he’ll rock back and forth and squeeze his eyes shut if he’s feeling especially silly. *ahem* Of course, the eyes don’t stay shut for long…soon they’re squinting open as he looks around the room to find out who all is admiring his little show.

This is my little bro:

Why is it that kids always wear the shoes of the people they love best? [Those shoes are mine…] 😀

Poor guy–can’t quite fit his little self in Fisher Price’s Little Mart! Close enough though, right?

Better watch your backs [and necks] around this little man!

“I don’t smile for cameras.” 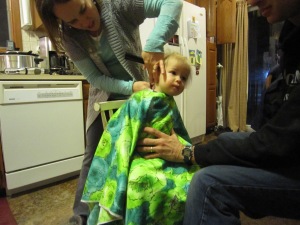 First haircut. Yes, even big guys like you need trimming now and then!

I think he was supposed to be a shepherd [with no sheep]. Or maybe Joseph [with no Mary]. Or maybe he was just being Henry.

Cute, huh? Actually, that last one isn’t Henry. That’s Riley. Even I don’t believe how much they look alike — at least what Riley looks like in this picture and what Henry looks like now. Up there, Riley’s feet looked exactly like Henry’s do now, and their hands and eyes and mischievous grins are almost identical. Besides, just like Riley, Henry is the type of guy who would spill all the animal crackers out of the bag, stuff some in his mouth, and then get all cute and smiley when you find him… 😉 Haha!

Most of the kids in the Craig and Esther Bergen family have been early talkers and late walkers. Maybe Henry wasn’t an early walker compared to some other kids, but compared to ours…he was. And he’s a late talker. Colby was saying words like “Inconceivable” by the time he was one and a half — okay, maybe that’s a slight exaggeration — and Henry’s biggest word is probably something like “Burp.” But that’s okay, he’s still pretty cute anyway.

He calls me Tee-tee, for Katie, or sometimes Tate, for Kate. When Mom brings him to my room to wake me up in the mornings, Henry will say a long, drawn-out, “Teeeeeeee-teeeeeeee,” just like he hears Mom saying, “Kaaaaaaaa-tieeeeeeee.”

He calls Brady “Bruder,” for brother.

Brittany is “Bit,” for Brit.

And his own name is just, “Yen-yee.” Or something like that.

At church, when Mitchell (my brother-in-law, who is leading singing this month) directs the congregation with his hand, Henry starts waving his hand too. And once as the choir finished a beautiful, energetic number, he yelled, “Yaaaaaaaay!” and clapped his hands for us.

When he’s not crying, that is.

And, er…speaking of crying… Perhaps I should get off the computer and go put dear little Hank to bed.